Nov 14 Comments Off on Built a standing workstation at the Laurel Springs Office for the Docs!

The time had come to start practicing what we preach at the head quarters office in Laurel Springs, NJ.  We had some extra space with a half wall, so we decided to turn it into a standing desk as shown in the picture below.  Standing desks are becoming more and more popular and we know a few things about them.

1.  For most people, a standing desk helps keep your spine and pelvis in a neutral position which COULD BE better than sitting for several hours a day.

2.  We have pretty solid scientific evidence that standing does not allow you to relax as much or to slouch in the chair, so you actually burn 60-90 more calories per day by standing!  While this is somewhat insignificant, if you add that up for a week or month, it’s becomes substantial.

Here is a picture of our standing workstation which is almost complete, just needs some paint! 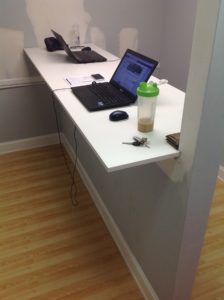 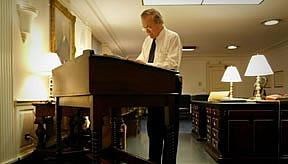 Shown above is Donald Rumsfeld using a standing desk. 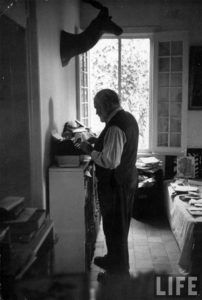 Ernest Hemingway often worked and typed in a standing position.

Ready for some other famous standing desk trivia?  It is openly argued that both Thomas Jefferson and Benjamin Franklin BOTH used standing desks very commonly, but to this day we are not sure which one actually came up with the idea first.