Nov 28 Comments Off on Dr. Mike Leahy talks about being a part of a winning Superbowl team on the Denver Broncos Medical Staff

This is a little inside bit from the Active Release Technique provider network where Dr. Leahy, the founder of ART reaches out to let us know how things are going up at the big office in Colorado.  Sounds like a lot of fun treating athletes on the Superbowl Champion Denver Broncos. 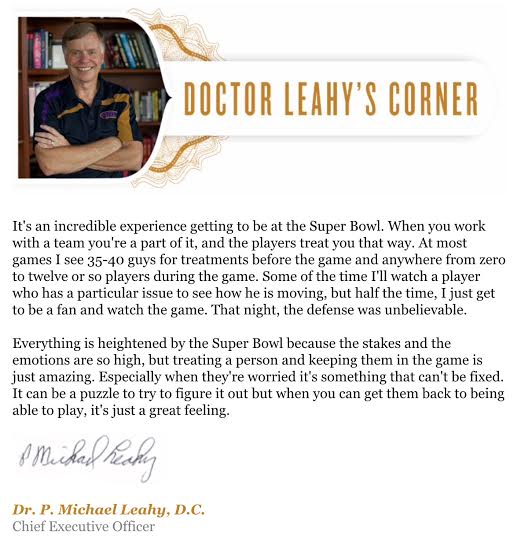 From a Sports Illustrated write up on Peyton Manning:

Today the Broncos still employ Roskopf and Michael Leahy, a Colorado Springs–based specialist in another branch of muscular science, Active Release therapy, to see players weekly—but Manning piles on more. On Mondays he has a 75-minute deep-tissue massage and a 30-minute stretch; on Tuesdays, Wednesdays and Fridays he sees Roskopf for painful but effective treatments at his office; and then on game days he spends 20 to 30 minutes with Leahy for more work.

“There are gurus all over,” says Manning. “Tom Brady’s got a guru. If you get to this age and you’re trying to keep playing, you need help. Everybody has a masseuse, but most guys do more now. Last year, when I flew Roskopf to Indianapolis, I was paying him what he’d make all day for his appointments in Denver. But if he helps me extend my career by two years, with two more years of salary, it’s well worth it.”

Manning’s right that he’s not alone. “I get Active Release therapy every Wednesday,” says 35-year-old Chargers linebacker Takeo Spikes, “to go along with massage and chiropractic on Monday and Friday. Soft-tissue care has been huge for my career.”

If that all seems like a little much, don’t knock it. For Spikes, who hasn’t missed a game since November 2009, and for Manning, who looks more and more like Peyton in his prime, the maddening attention to detail is paying dividends.