Oct 14 Comments Off on What my slowest marathon ever taught me about myself and why I still like running.

Most of our patients know that I hope to run the Bank of America Chicago Marathon until I can no longer safely complete the run, and I hope that a date like that is 20 – 30 years at this point. With the addition of my second daughter this summer, my training for the marathon went downhill rapidly. Simply put, would you rather take a nap on the couch with your 10 week old or gut out 18 miles dodging traffic. If you tell me the run, awesome, but if you want to know where my brain was at, let me show you the face I would rather cat nip with on my days off. 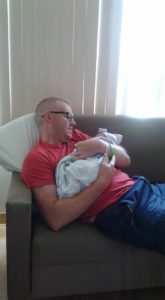 This year I did more on the treadmill than I have ever before and while that was OK, my brain soon grew tired of endless ESPN and bad day time TV while running at the Planet Fitness in Blackwood, NJ and Mount Laurel, NJ. Probably not the best choice, but running outside and picking a route with a few hills seems to be far more productive for me as a runner! I’m sure this is all mental and without the ease of access to the treadmill and the air conditioning, I would have chosen to run outside, but simply put, this summer in South Jersey was HOT!

So, last weekend gets here and I run the Chicago Marathon on limited training and with a fair amount to much of socializing in the city that I lived in for four years, what did I learn.

1. If I keep my pace very under control, I can complete a 26.2 mile race, but while the finish line is very satisfying, this time around my finisher time was far from satisfying.

2. I had 25 or so “South Jersey / Philly” people yell at me, hug me, high five me during or after the race. It was truly uplifting to hear around Mile 15, “Hey I’m from Deptford, just saw your Run856” shirt. Later at the postrace party I got a completely random high five from a tall man who shouted “Nice shirt, I grew up in Cherry Hill!” Later that evening in an elevator at a hotel, two young men look at me and said “South Jersey Athletic Club, where are you from?” and I stated Mount Laurel, and they both busted out laughing, one was from Moorestown, NJ and the other was visiting from Cherry Hill, NJ and they both were wearing Kutztown University shirts. I must say that I did not grow up in the South Jersey area, but I have definitely noticed that people from New Jersey seem to seek each other out when in a town like Chicago and that is very uplifting.

3. I attended the National University of Health Sciences in Chicago for Chiropractic school and got to see not only my cousin while visiting (a fellow NUHS Grad) but several of my friends that I have not visited with since graduating a little over two years ago now.

4. I went into this race with the mental attitude of just do the best you can, sand bag the first 18 or so miles and then try to finish strong and that really worked well for me.

5. I didn’t hurt any parts of my body and finished, so for the most part that is an all-around win. 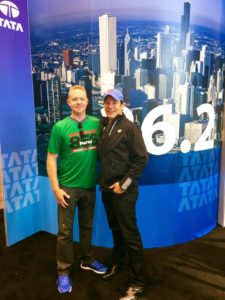 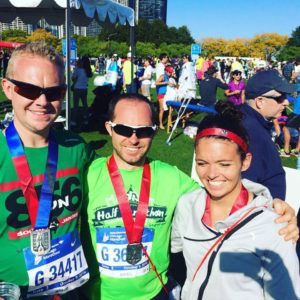 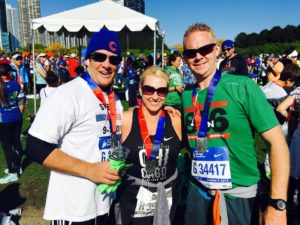 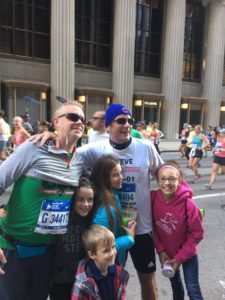 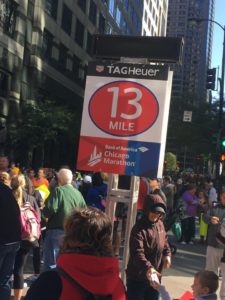 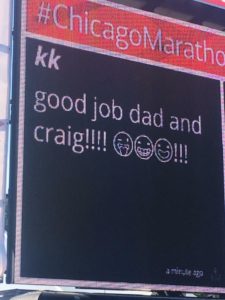