Nov 09 Comments Off on Local Books About Running – My Race with Diabetes and the Oli and Running: A Love Story: 10 Years, 5 Marathons, and 1 Life-Changing Sport

Two local books that we are looking forward to reading recently dropped in local circles and both are written by South Jersey authors!  We highly recommend both of these LOCAL authors who discuss running and life so well!

Book 1 – My Race with Diabetes and the Oli

While growing up in Mount Holly, New Jersey, Ed Espenshade played catch with his dad, attended Phillies and Sixers games, and dreamed of being an athlete. But soon after he acquired a paper route as a twelfth birthday present, Ed was hit by a car while attempting to cross a road. After blood was drawn during an examination in the emergency room, Ed received shocking news: he had diabetes.

As his path took an unexpected turn, Ed describes how he became more determined than ever to pursue his athletic goals. After an unsuccessful attempt at soccer, Ed eventually found his home as a cross country runner in high school and college. It seemed that Ed was defying all odds as he continued to run hundreds of road races that included four marathons. But everything changed in 2003 when Ed found himself face down on the street during a training run and soon received another stunning diagnosis: he had a rare nonmalignant brain tumor. As he details his continuing journey with two serious health conditions, Ed shines a light on the importance of keeping hope, faith, and perseverance alive in the face of life’s greatest challenges.

In this inspiring memoir, a diabetic endurance athlete shares the story of how he has battled chronic illness by pushing through his hardships and never sacrificing his dreams. 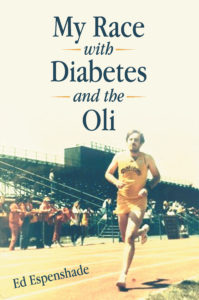 Jen Miller has fallen in and out of love, but no man has been there for her the way running has.

In Running: A Love Story, Jen tells the story of her lifelong relationship with running with wit, thoughtfulness, and brutal honesty. Jen first laces up her sneakers in high school, when, like many people, she sees running as a painful part of conditioning for other sports. But when she discovers early in her career as a journalist that it helps her clear her mind, focus her efforts, and achieve new goals, she becomes hooked for good.

Jen, a middle-of-the-pack but tenacious runner, hones her skill while navigating relationships with men that, like a tricky marathon route, have their ups and downs, relying on running to keep her steady in the hard times. As Jen pushes herself toward ever-greater challenges, she finds that running helps her walk away from the wrong men and learn to love herself while revealing focus, discipline, and confidence she didn’t realize she had.

Relatable, inspiring, and brutally honest, Running: A Love Story, explores the many ways that distance running carves a path to inner peace and empowerment by charting one woman’s evolution in the sport. 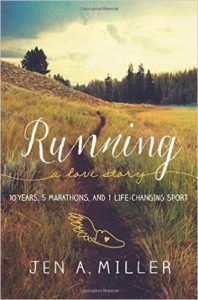