Nov 29 Comments Off on HOCKEY AND GROIN INJURIES, don’t let them slow you down!

It’s truly hard to believe, but the hockey season is just around the corner!  With the fall coming up, high schools and colleges will soon begin their practice schedules, followed shortly thereafter by the regular season.  Don’t be surprised, though, when hockey players tell you they’ve been training all summer for the upcoming season.  Like every sport, ice hockey is played all year, weather being a non-factor as to when it can be played.  This allows players to skate almost daily, putting their bodies through intense blue line sprints, goalies moving side-to-side for hours, and many more dynamic and explosive movements.  This doesn’t include the intense off-ice conditioning and exercise that they do outside in the summer heat.  When school is out, they play hockey; plain and simple.  Without proper recovery between training sessions, it can lead to injuries that carry over into the regular season.  The most common injury is one that almost every hockey player has experienced, and one that can be devastating; the “pulled groin”.

This injury, more specifically a strain of the adductor muscles of the thigh, is commonly seen in hockey due to the movement of the legs and hip during a skating stride.  These are a group of muscles that bring your leg from outside to inside, assisting in creating an explosive step on the ice.  While this is a strong group of muscles that work in unison, they are often overworked in nature because of the amount that they must work through a practice or game setting.  Injury or strain to groin is most commonly caused by an “over-stride”, or when your leg is extended too far behind you after you push off with your hip and leg.  When this occurs, the adductor group gets stretched too far, leading to a strain.  Freak accidents are almost common in hockey, so a player who takes out another player may cause injury to the region.  The result of the injury leads to pain on the inside of the thigh, and the ability to push off and bring your leg in for a step forward feels almost impossible; as if you’re pushing as hard as you can and, yet, you are getting absolutely nowhere.

While groin injuries are common in ice hockey, they can be seen in all sports, especially those seen this coming fall.  Most notably of the other sports are football, soccer, field hockey, volleyball, and tennis.  These sports share a common theme: quick, subtle side-to-side movements that require the adductor group to help with speed transitions in different directions.

The good news for all of this you might ask, is Active Release Technique has successfully helped many hockey players get over all sorts of leg and groin problems from the professional ranks down to pee-wee!  Don’t let those nagging “undisclosed lower body injuries” slow you this season, give us a call to see if we can your hockey season skating smoothly!

Hockey injuries happen, give us a call if you aren’t feeling 100%! 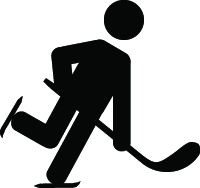