Nov 06 Comments Off on Hoka this and Hoka that, lots of Hoka stuff on the inside of this post.

So last year we were hot and heavy on the HokaOneOne running shoe revolution taking place around our offices here in South Jersey.  It all started a few years ago when Dave Welsh, the owner of the Haddonfied Running Co, made Dr. Mark start wearing a pair and told him these might be the shoes that permit him to at least run occasionally on surfaces harder than the OCNJ Boardwalk.  While Dr. Mark tried to drag his feet as best he could, he quickly found himself running a bit more and more in the Hoka Bondi’s and now has a few different pairs and models from Hoka.  Dr. Mark gravitated towards running in Hoka running shoes because they left him feeling not quite as sore and tender as had become accustomed to after longer runs.

Late 2014 hit and Dr. Craig’s wife had been struggling with sesamoiditis right in the area of the ball of her foot after running a few marathons in Chicago.  Dr. Mark somewhat circumnavigated my feelings on the Hoka’s and gave my wife a pair as a gift to see how she made out and over time her pain and discomfort levels on long runs decreased in the areas around the ball of her foot.

Throughout 2015, several of our patients with some older, mileage related, over use like injuries started to make the switch to Hoka and it is fairly safe to estimate that around 80% of our patients that at least use them on long runs have been doing better overall with tolerating running.  Not everyone loves them and you must try them on before you buy them!  Occasionally we notice that some people just can’t get over how marshmallowy padded these shoes are and don’t feel right no matter what they do or try.  So again I state, you must try these shoes on before you purchase!  In my case, I have run almost exclusively now in the Adidas Boost ESM for several years and simply put, that shoe is not for everyone either!

Leading us up to the present day and time of 2016, where I, Dr. Craig finally broke down and got my first pair of Hoka running shoes (which I will show off in another blog post), and while I have not broken mine in yet cruising around the office, a few of my family members have also picked them up for use as walking shoes.  After my wife had some success with the shoes for use on long runs, my mom was fitted for a pair of the Hoka Bondi’s last summer.  The reason I wanted to see my mom get a pair was because she was an avid walker who greatly had to lower her distances due to heal pain.  She was referred to a podiatrist who ordered x-rays and showed her that she had developed bilateral heel spurs and the one side had become fairly sizable.  The next step was foot orthotics and while those helped, she still felt moderate pain with almost every step.  Enter the Hoka Bondi’s for that over the top cushioning and slightly rockered heel to toe motion, and she is back to walking 3 – 5 miles a day, 5 to 6 days a week dependent on her schedule.

So now in 2016, we had both my older sister and father fitted for Hoka’s this past weekend at the Running Co’s of Haddonfield and Moorestown.  I can’t thank Dave, Shawn, and the rest of their staff at the Running Co’s enough for all the help and time to get these shoes right!  Neither of them have been able to get past the break in stage, but I will report back soon with how they are holding up.  They will use them mostly for walking and not running.  Most of the family feels strongly that my “marathoning exploits” are “bad for my knees, bad for your back, and your going to get arthritis in your joints” but we will tackle those issues another day.

So without further wait, here are some shots of the comparison try on session we had at the Running Co with Shawn from the Running Co, myself and my father. 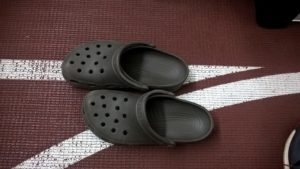 The poor guy walked in with Croc’s and walked out in Hoka’s! 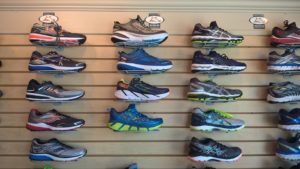 The line up of Men’s HokaOneOne running shoes at the Running Co of South Jersey. 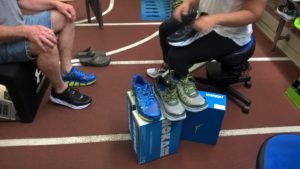 Testing out various Hoka running shoes for static fit. You can see the Hoka Clifton 3, Hoka Bondi 4, and Hoka Infinite in this photo. 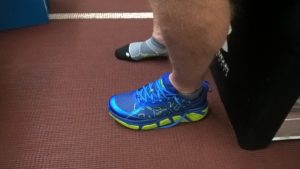 The winner! The HokaOneOne Infinite is shoe Dr. Craig’s father choose after about a 20 minute fitment and walking around the store session.

Are you looking to try on a pair for Hoka shoes for walking or running?  We can’t stress enough that you must give them a little test drive in the store, but more often than not, they help!  We only buy shoes from two shops in South Jersey!  Service, quality and good people are what these shops are all about! 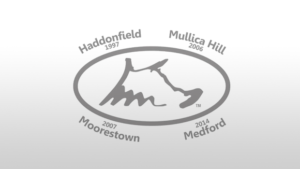